A&E @ the Glam – Strength in Unity

I have said from the very beginning that if we are to ensure a 24 hour A&E Service at RGH then we need to forget about Party Politics, and come together to work cross-party.

We need you to play your part too, by signing the below letter. If you wish to do so then please let me know by filling in the form at the bottom of this page:

The configuration of Emergency NHS services across Cwm Taf Morgannwg has changed over the years – and will continue to change along with medical advances and changes in the local population. We welcome, for instance, the development of the new Major Trauma Centre at UHW, which will almost certainly save lives and we recognise that for some specialist forms of care it will be necessary to travel to a regional centre of excellence such as the Burns Unit at Morriston. We also understand that there is a UK-wide shortage of Emergency Consultants. and that Cwm Taf Morgannwg is not in a unique position with the recruitment challenges it faces,but would note that 5 of the 7 LHBs in Wales have substantially increased emergency consultant numbers over the last 6 years whereas Cwm Taf Morgannwg has not. We would argue that the uncertainty created over the future of the hospital due to the South Wales Programme has itself created a self-fulfilling prophecy about recruitment problems.

Our starting point, however, is that all NHS services should be safe, efficient and delivered as close to people’s homes as is medically and logistically feasible. Time-critical medical interventions can make the difference between life and death in many emergency situations and we are concerned that if the A&E were permanently to close at any one of the three hospitals, significant numbers of patients in some of the most deprived communities would not be able to get to an Emergency Department in time. A&E cannot be seen in isolation from other services such as GP surgeries, local minor injuries units and out-of-hours support. Additional capacity in these services would almost certainly lighten the load in the Emergency Departments, but this must be put in place before any changes to the configuration of Emergency Care is considered, let alone implemented, with evidence that they have substantially reduced the load on Emergency departments required before any changes. Changes to A&E provision at any one of the hospitals would have serious implications for other services within the hospital, including ITU and theatre and might harm the recruitment of other specialists.

There would be significant knock-on effects if the A&E at the Royal Glamorgan Hospital were to be downgraded to a Minor Injuries Unit, as the hospital would almost certainly lose its Intensive Care Unit and operating theatre. This could jeopardise the long-term future of the hospital. The RGH’s Emergency Department is the most used in the area, with roughly 65,000 attendances a year, and ranked the best in terms of viable outcomes.  We fear the two other Emergency Departments would find it impossible to cope with the additional workload and that many patients will travel instead to UHW, which is also already over-stretched. We are also concerned that extra A&E admissions to PCH and POW would put additional pressure on not just their respective A&E depts but onwards and throughout the hospital system. We are determined to work with people of all political parties and trades unions (and none) to get the best possible outcome for the communities we represent. We believe the eventual decision should be informed by clinical best practice and local experience on the ground – and not by any partisan consideration.

We are calling on the Cwm Taf Morgannwg University Health Board to do the following:
1) Rule out the closure of A&E at the RGH or changing it to a 24-hour Minor Injuries Unit.
2) Reinstate the option of maintaining a full consultant-led A&E at all three hospitals. This would require a serious new attempt at recruiting Emergency Consultants who would have secure full-time permanent posts working across all three hospitals. It would also require at least a ten-year commitment to RGH so that potential staff can apply with confidence.
3) Bring forward proposals to extend the opening hours of the Minor Injuries Unit at Ysbyty Cwm Rhondda and Ysbyty Cwm Cynon and make these units more readily accessible for walk-in patients.
4) Bring forward other proposals for community health services, including improvements in the out-of-hours GP service, that might alleviate the pressure on all three A&E departments
and bring services closer to local communities.

In addition, we are calling on the Cwm Taf Morgannwg University Health Board to publish the following:
1) A socioeconomic and equality impact assessment of any proposed changes.
2) Detailed analyses of travel-to-hospital times, average ambulance response times and levels of car ownership, for all electoral wards in the area. that analyses such times during periods of poor weather.
3) Detailed statistics for levels of ischemic heart disease, diabetes, stroke and infant and adult mortality for all electoral wards in the area. and how they compare with the Welsh averages/wealthier wards in Wales.
4) An assessment of how many patients from each electoral ward would be affected by a proposal to move to an 8 to 8, and 8 to 10 and an 8 to midnight Emergency Department.
5) An assessment of capacity in the Emergency Departments at POW, PCH, and UHW and how they would cope with additional patients.
6) Statistics for the number of patients who are admitted on towards at each hospital from A&E.
7) An assessment of the impact to the Welsh Ambulance Service, Ambulance response times, handover response times, in terms of waiting times at hospitals, blue light trauma travel times
and non-emergency transport between hospitals. 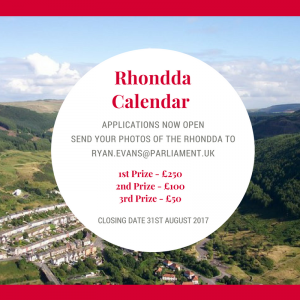 Entries for submitting your photographs for the Rhondda Calendar are now open.

The top twelve entries will be show cased in the 2018 Calendar with prize money for the top three entries.

Proceeds from the sale of the calendar will go to local charities.

Chris Bryant @RhonddaBryant
Porth, Rhondda chrisbryantmp.org.uk
Labour MP for the Rhondda. If you are a constituent with a casework query, please contact my office on 01443 442521.
Follow 0