I am incredibly disappointed the Government will be closing Oldway House in Porth, the debt management service, taking away 93 jobs. I raise this issue both at Prime Minister’s Questions and to the Parliamentary Under-Secretary.

Rhondda has one of the highest unemployment rates in the country. It makes no sense to take these jobs out of the Rhondda to relocate them in Cardiff. I do not believe that the tax-payer is getting value for money by making people in the Rhondda redundant or having to relocate to Cardiff.

The Prime Minister fails to understand that relocating these jobs to Cardiff, yes does keep them in Wales, but not all of Wales is in Cardiff.

Yesterday I pressed the government on plans to close the debt management service in the Rhondda, taking 93 jobs and sending them elsewhere. pic.twitter.com/eclTivdTJf

Letter to Secretary of State for DWP Damian Green MP 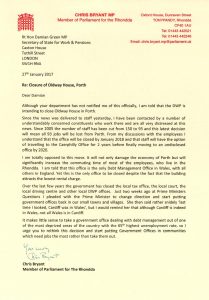